Keller Williams has announced that we are the #3 Real Estate Co in the US overtaking Re/Max by 3686 agents!

Only company just in North America to grow Remax has 72 countries!

Keller Williams has no debt and profited every QTR in 08 and shared over 2 million in owner profit to associates and no layoffs at KWRI
Posted by Paul Jones Realtor at 12:35 PM No comments:

Realtors across the country have been advocating for a comprehensive stimulus package to reduce housing inventory, make mortgages more affordable and available, and help deserving families refinance or modify their loans so they can keep their homes.
We are committed to these goals and to getting something done immediately. There can be no doubt that stabilizing home prices and restoring confidence in the housing market are critical to an overall economic recovery.
It is vitally important for President Obama and Congress to complete a bipartisan stimulus package focused on housing. The American Recovery and Reinvestment Act of 2009 is a good start, but much more needs to be done. It is imperative that the federal government act immediately to encourage homebuyers to re-enter the market and to stop families from losing their homes to foreclosure.
Federal "rescue" dollars should be directed to buy down mortgage rates - a half million additional homes could be sold if interest rates were lowered by just 1 percentage point. Additionally, banks must find ways to help prevent foreclosures and unclog the credit market. These steps are necessary to stabilize housing and ensure that home values do not become artificially low, exasperating today's problems.
Realtors support a $15,000 homebuyer's tax credit and its expansion to include all homebuyers, not just first-timers. The elimination of the repayment feature and the credit extension through December 2009 will have a meaningful impact for home buyers. Reinstating the increased FHA, Fannie and Freddie loan limits that expired Dec. 31, 2008, also will help the recovery by increasing mortgage liquidity. Banks need to begin lending again.
The federal government, Realtors, lenders and local municipalities need to work together to turn the economy around. President Obama and Congress will have to move quickly to get a comprehensive housing recovery plan in place to protect families, homes and jobs. A stable housing market is the only way to begin an economic recovery.
We see first-hand that consumer confidence is shaken, but we find the dream of homeownership still very much alive. We urge all parties to work together - and work quickly - to restore confidence in the housing market and the U.S. financial system.
BY VARDELL CURTIS

If you are interested in purchasing or selling Real Estate please call Paul Jones at 435-313-6708 or email prjones@kw.com
Posted by Paul Jones Realtor at 1:17 PM No comments:

Buying A Home In Southern Utah

Finding homes, such as resale, new homes, pre-construction, home builders, luxury homes, condos, townhomes, land, lots, golf course community, gated communities, retirement community, or investment property, and getting relocation help in St George Utah and the surrounding communities, such as Santa Clara, Washington City, Ivins, Entrada, Leeds, Veyo, Hurricane, LaVerkin, Toquerville, Central, Pine Valley, Brookside, Dammeron Valley, Gunlock and New Harmony, is sometimes a challenge. You can find it here on my St George Utah real estate website, though. In fact, make your home search easier and become a VIP Buyer. Get immediate information on ALL new listings that match your criteria emailed to you. As always, if you have any questions about the Southern Utah real estate market, or finding that perfect home here in the St George area, please let me know. Please call me at (435) 313-6708
Paul Jones.

Thank You For Visiting Your Southern Utah Real Estate Information Source! I strive to provide the highest quality of service to all our clients while making each transaction as profitable, professional, successful and stress-free as possible. I understand the importance of professional ethics, integrity and continued education. Call or E-MAIL me today for information on your next Southern Utah real estate transaction.
Paul Jones
prjones@kw.com
435-313-6708
Website: http://www.paulsellsdixie.com
Posted by Paul Jones Realtor at 12:44 PM 1 comment: 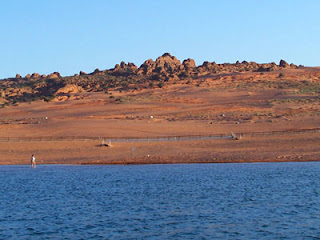 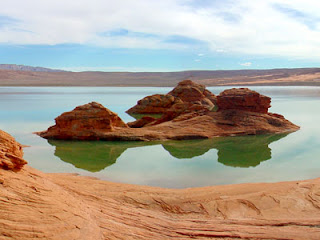 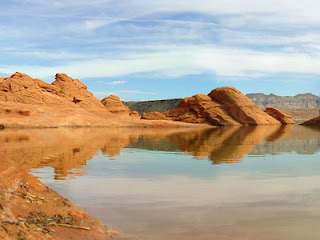 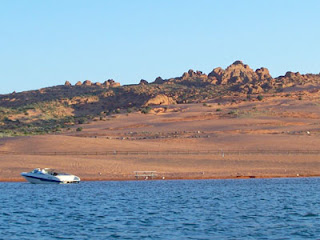 Location: From I-15 take the Hurricane Exit 16. Travel four miles to Sand Hollow Road and turn right. Go one mile and turn left onto the main park access road and follow to the park.

These reservoirs are very close to St. George and offer convenient opportunities to cool off before or after work or while on vacation.

Scenic backdrops to these reservoirs are stunning particularly in the early mornings and evenings.

With warm summer temperatures in St. George, you'll enjoy the cooler but not too-cold waters of the local reservoirs. Temperatures near the surface can get to over 80-degrees in the summer.

The Hurricane Sand Dunes at the southern end of Sand Hollow State Park are an ATV adventure land.
Posted by Paul Jones Realtor at 12:17 PM No comments: 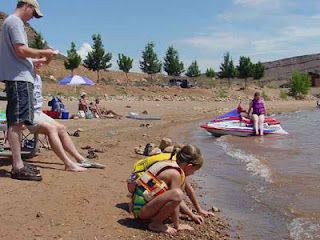 Day Visits: A day-use permit covers entrance and use of boat ramps. 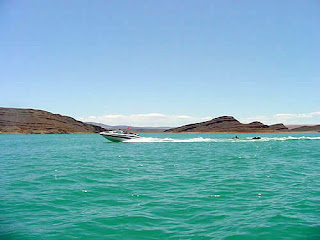 DIXIE SPIRIT
Heritage, pride, and perseverance are all synonymous with the pioneering spirit that made St. George what it is today. While looking through archives of historical photos and reading journals from those who settled this beautiful yet desolate land, one gains a better understanding of the term, “the Dixie Spirit.” It was that spirit that led to the creation of irrigation systems that brought flourishing life to this small western town during the mid part of the 19th century. Irrigation water brought crops to life, quenched the thirst of both man and beast and laid way for a city to be cut out of sandstone and sage brush. After more than 140 years a memorial has been created to celebrate the history and importance of irrigation in St. George. Welcome to the Water Walk on Historic Main Street.

WATER WALK
The Water Walk begins at the northern most end of Main Street with the creation of the Brooks Nature Park and Cox Pond. The Cox Pond, located on the east side of the street was created in the 1900’s as an irrigation pond that supplied water to residents and businesses in the downtown area and made a great swimming hole on hot summer days. The Brooks Nature Park envelopes this pond and features a small amphitheatre, nature trail, shade structure parking lot and connection to the Red Cliffs Desert Reserve trail system. The pond is fed by a series of springs and serves as the head waters for the Water Walk.

The focal point of the Water Walk can be found just north of the existing St. George Social Hall at the Pioneer Center for the Arts. There you will find a new plaza and parking lot adorned with plants and flowers and a memorial to the legacy of irrigation in Southern Utah. The Water Master, a bronze created by L’Deane Trueblood and Annette Everett and donated to the City by the Cox family, will tend a head gate symbolizing the importance of the water turn to irrigators.

A system of irrigation ditches will convey water along a retaining wall in front of the U.S. Post Office on Main Street all the way to St. George Boulevard where the water will be captured in a pipe to feed the water features at the Main Street Plaza building.

TOWN SQUARE
Historically, the parcel of land south of the Woodward School all the way to 100 South Street was known as the Parade Grounds. It was here that soldiers returning home from war were honored for their service to country and community. It was very important to Mayor McArthur and the City Council that this area remain a gathering place for events and activity.

The St. George Town Square is more than just a park. It is a space specifically designed with events in mind. It’s hard not to notice the Square’s most prominent feature: Heritage Tower. This 45-foot structure includes four, eight-foot stained glass windows that depict moments in St. George’s history. This feature, known as “Portholes of the Past” will be backlit at night and stand as a reminder of the areas proud heritage. It also provides theatrical sound, lighting and power for performances and other activities on the Square. Other features at the Square include: a splash pad, winding river, traditional pioneer crops, restrooms, additional power outlets for events, interactive irrigation water feature, bronze exhibit areas, a flag memorial, parade grounds, festival grounds and an amphitheater. As you walk around the Square see if you can identify the historical and geographical symbolism of the features.

PURPOSE
The Water Walk and Town Square and other new improvements in the downtown are far more than simple beautification projects. Utilities such as water lines, sewer lines, storm drains, gas lines and communications cabling were all in need of serious attention due to aging and were incorporated into the improvements. While utilities were being replaced it made sense to also reconstruct parts of north Main Street to fix existing drainage problems and eliminate rough driving conditions. Improvements have also been made to make area roads and sidewalks more convenient and safer for pedestrians.

Mayor McArthur and members of the St. George City Council firmly believe that the health and economic vitality of a community is best reflected in its downtown, the heart of the city. Creating a destination in the heart of our city is the principle motivation for the improvements. These improvements represent the beginning of a bright future for what will always be referred to as historic St. George. The State of Utah will soon begin construction of a new Fifth District Courthouse on the property currently known as West Elementary. This will undoubtedly spawn more economic progress and development in the area.

The Church of Jesus Christ of Latter-day Saints decided to take the opportunity to address some landscape and parking lot issues around the historic Tabernacle building as part of the Town Square project. The church agreed to pay for brick pavers in its parking lot to match those at the new county library and redo some concrete and landscaping around the building. Washington County, Washington County School District and the LDS Church have all played a pivotal role in making the Town Square a reality.
Posted by Paul Jones Realtor at 11:02 AM No comments: