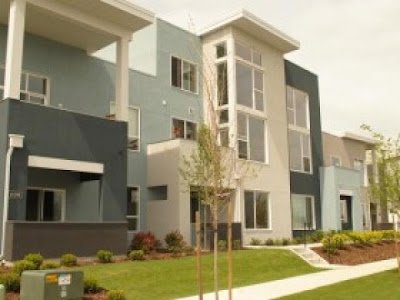 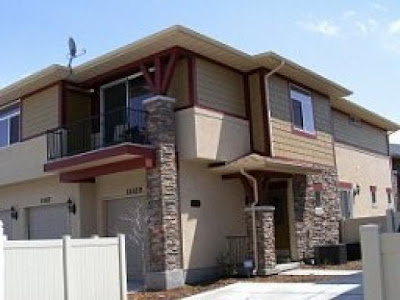 Bonneville Builders of Salt Lake City has plans to build high-density housing in the Little Valley area. It has been rejected twice by the city. However, Bonneville Builders wants to be heard before the City Council. No date has been set for the meeting, but after speaking with Bonneville Builders they plan on continuing to try and get approval. The area they want to build the high density housing is next to Little Valley Elementary and Sunrise Ridge Intermediate. You might be wondering, "What is high density housing?"
High Density Housing definitions from the web
* An apartment, or flat, is a self-contained housing unit that occupies only part of a building. Such a building may be called an apartment building, especially if it consists of many apartments for rent. Apartments may be owned by an owner/occupier or rented by tenants.
* Over 60 dwellings per hectare and generally five stories or more high, for example apartment buildings.
What is the reasoning for the high density housing? To build more affordable housing.

More questions to consider?
How will this affect our market values?
What type of housing will this be? Apartments? Townhomes? SFD?
What will the price range be?

I am very curious about how this will play out in the future and I will keep you up to date on this process. If you should have any further questions please call me at (435) 313-6708.

The two pictures are of homes in the Salt Lake City area, in the subdivision Daybreak. Bonneville Builders said, the homes would be similar to the homes in this subdivision
If you are interested in Real Estate in St.George, Utah please call me at 435-313-6708 or visit my website at: http://www.paulsellsdixie.com/
Posted by Paul Jones Realtor at 11:40 AM 1 comment:

St. George—While Washington County real estate experts are citing a temporary decline in foreclosure activity this summer, banks are expected to claim distressed properties with renewed focus in the fall, with 3,000 additional residential foreclosures anticipated during the next 12 months.
Amid widespread economic and financial instability, some lenders have reduced their foreclosure activity in Washington County, said Allan Carter, director of Developer Services for Southern Utah Title.
“The foreclosing lenders are baffled on how to solve the problem,” Carter said, with many residents unable to make their mortgage payments. “They’ve taken a little bit of a reprieve in Washington County.”
County property records support Carter’s theory, with approximately 192 notices of default, the first step in the foreclosure process, recorded in Washington County from July 1 to July 29 among all property types, representing a significant drop from the 293 default notices documented during the same period last year.
From July 1 to July 29, Washington County recorded 118 foreclosures among all property types, essentially remaining flat with last year’s figure of 121.
Although the decline in default notices offers a welcome breather from the inflated level of activity experienced in recent months, Carter said the decline is little more than a temporary respite, expecting lenders to return in full force this fall in an effort to claim their assets.
“We expect that the aggressive nature of foreclosures will pick up steam as we get into the fall and winter,” he said. “Lenders are back off vacation, the unemployment picture isn’t changing significantly and they have to capitalize their banks by getting rid of this inventory.”
Carter said Washington County’s foreclosure rate is likely to reach its peak in 2011, with another 3,000 residential foreclosures anticipated in the next 12 months.
“It will be one of the largest years for foreclosures,” he said of 2011.
Kathy Nielsen, President of the Washington County Board of Realtors, said she also anticipates continued foreclosure activity in the coming months.
Jeremy Larkin, a local Realtor with Keller Williams Realty, said the recent decline in foreclosure activity is an encouraging sign for the market, although he does not expect the region’s continued difficulties with bank-owned properties to subside anytime soon. “I hope that this thing gets under control in the next 12 to 18 months,” he said.
Although activity has temporarily subsided this summer, Washington County is on pace to surpass 2009 foreclosure figures, according to county records.
The county recorded 882 foreclosures among all property types this year, from January 1 to July 29, a noticeable increase from the 716 recorded during the same time frame in 2009.
In only 7 months, Washington County has surpassed the total number of foreclosures recorded in 2008.
This year’s foreclosure total is destined to grow this fall when lenders resume aggressive foreclosure activity with a renewed sense of focus, Carter said.
“We really expect to see foreclosures run unimpeded,” he said.
By Scott Kerbs/The Spectrum
Posted by Paul Jones Realtor at 10:12 AM No comments: