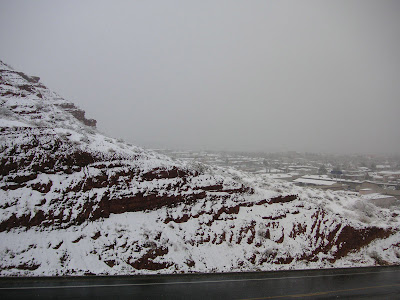 The rare occurrence of snow is expected to be visible outside the windows of St. George today, and the National Weather Service warns that significant accumulations are expected.

Since Sunday, Washington and Iron counties have been under a winter storm advisory by the National Weather Service that was to remain in effect until 6 a.m. today for the St. George area and noon for the Cedar City area.

Due to hazardous driving conditions, the Utah DepartÂ­ment of Transportation cautions that unnecessary travel should be avoided until the warning is lifted.

Despite the warnings, those with law enforcement and the school district say things ran smoothly Monday and are expected to run smoothly today.

On the highways, Utah Highway Patrol officers from both the St. George and Cedar City areas said things weren't all that bad Monday, but that doesn't mean they're not prepared for the storm, which is expected to continue into today.

UHP Senior Trooper John Gardner said there were much fewer problems than expected Monday in the St. George area, but the snow expected to be on the ground today could create problems.

"We're bracing for it," he said. "But it will probably be business as usual."

If people have to head out on the highways, Gardner said, it's best to drive a lower speeds.

"In snow the contributing factor to accidents is always speed," he said. "We just need to tell people to slow down."

UHP Sgt. Ryan Bauer, who patrols the highways near Cedar City, said there were a few more accidents in that area Monday, but things were still better than expected.

"Most of the afternoon the roads had just been wet," he said. "We'll deal with whatever we're given. We won't close anything unless the storm dictates it."

Officials from the St. George Police Department said the number of accidents was up slightly Monday, something that could have been attributed to poor weather conditions.

"It's not too large of an increase," said Officer James Schafer. "Usually, when we have snow or rain, they do increase É but it's nothing major."

Marshall Topham, assistant superintendent for secondary education with the Washington County School District, had a similar view of the storm. He said as of Monday evening the school district has no plans to alter bus routes or cancel school.

"Right now this storm doesn't look like a storm that's threatening to us," he said. "If it's just a snowy day where the roads aren't slick then we can negotiate that."

Topham added that school district officials planned to wake up at 4 a.m. today to assess the situation, but it's unlikely school will be affected.

"This one isn't too impressive to me," he said. "I don't think this is going to be a big deal."

BY BRIAN AHERN
Posted by Paul Jones Realtor at 11:04 AM No comments: