First Quarter Homes Sales indicate strong signs of recovery after posting 41 percent surge in year-over-year sales. Bolstered by an influx of affordable bank-owned properties coupled with attractively low interest rates, Washington County recorded 993 sales in the first quarter, representing an increase of 287 sales from last year’s quarterly figure. With an ample selection of low-priced distressed properties enticing buyers and driving sales upward, affordable pricing is a primary factor in the market’s renewed activity. The recent sales boost likely serves as the first indication of the market’s inevitable resurgence from the depths of the sub-prime lending crisis. From January to March, the average price of a dwelling in Washington County increased by about $11,000 to $173,673. This slight increase is an encouraging indication of recovery. SUTC Developer Services

Two-Thirds of Americans Say Now Is a Good Time to Buy a Home. A nationwide survey recently conducted by Fannie Mae has determined that 65% of today's home owners and renters still believe in the solid value of homeownership and prefer to own their own home if possible. The survey did, however, determine that potential home buyers have become more cautious since the recession in real estate markets and precipitous rise in foreclosures nationwide.
As Fannie Mae Chief Economist Doug Duncan explains it, the downturn in the housing market has led to a "rebalancing" of consumer attitudes toward homeownership, with most Americans adopting a more realistic and long-term view than the investor mentality in which property "flipping" for near-term gain was a major consideration. The survey also determined that 60% believe that purchasing a home today is harder than it was for their parents, and nearly 70% believe it will be even tougher for their children to achieve homeownership. At the same time, two-thirds of respondents said that they believe now is a good time to buy a house — nearly as many as said so back in 2003, prior to the housing boom. And 70% indicated that they think buying a home is one of the safest investments they could make, although this was down from 83% who said as much in 2003. Read more about Fannie Mae's survey on CNN.com. NAHB
Posted by Paul Jones Realtor at 10:19 AM No comments: 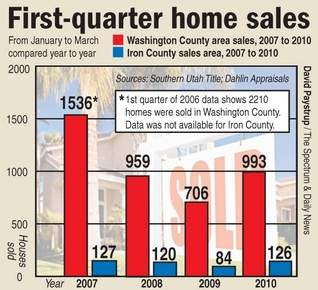 "It's being driven entirely by distressed properties,"
Carter said. "Everybody likes a good deal."

The surge in consumer activity has proven lucrative
for Larkin's business, he said, as the Realtor's sales
have doubled since the first quarter of 2009.

Larkin described the region's housing situation as
"the tale of two markets," with prospective buyers
flocking to distressed properties and other residential units boasting impressive savings
opportunities, but little activity occurring in the o
verpriced and high-end segments of the market.

"It's as though they don't exist," Larkin said of the
overpriced homes in competition with an influx of
foreclosures and other distressed properties.

Carter said it is not uncommon to see several offers
on the same foreclosure property in Washington
County, and with increased demand for housing,
prices are on the rise.

From January to March, the average price of a
dwelling in Washington County increased by about
$11,000 to $173,673. The slight increase is an
encouraging indication of recovery, Carter said.


"Every area that we measure is getting better," he
said. "We're a long way away from finding our way
back, but we are least at a point where we can
measure the improvement."

Renewed optimism in the housing sector is not
exclusive to Washington County, with Iron County
posting a similar 45 percent year-over-year sales
increase in the first quarter, said Chris Dahlin.
president of the Iron County Board of Realtors

"Home prices are continuing to drop," he said.

Foreclosures and short sales remain prevalent in
Iron County, with distressed properties representing
approximately 85 percent of the county's sales in the fourth quarter of 2009.

The county's market is rife with distressed
properties, Dahlin said, and he expects the trend to
continue at its current inflated rate for another three
to six months.

"We still have a crop of foreclosures still coming on
the market," he said. "Which means prices won't be
going up."

Dahlin said he is cautious when predicting price
changes, but he acknowledged the possibility of
continued price drops in the coming months.

The future is largely uncertain for Iron County's real
estate sector, Dahlin said, as a number of factors
could suppress the positive sales trend, including
the looming conclusion of the federal first-time
homebuyer tax credit this month and the possibility
of interest rate hikes.

"There may still be pressure for prices to come
down in the near future, especially in light of losing
the tax credit availability," he said.

BY SCOTT KERBS
Posted by Paul Jones Realtor at 10:06 AM No comments:

A new government program aimed to speed up these notoriously sluggish transactions goes into effect on April 5, increasing your chances of negotiating a distressed-property bargain.
Q: I am looking to buy my first home, and it seems like short-sales are priced much lower than regular sales. Are these prices negotiable, or are they the bottom line that lenders will accept?
A: Many lenders negotiate prices for short-sales, in which the seller is offering the home for less than is owed on the mortgage. But traditionally the only way you could find out was to submit a below-list offer and wait—often for many months—for a response. If the bank made a counter-offer, you knew you were in the ballpark; if they didn't respond at all, you were too low. By then, you may have lost all interest in buying the property.
The good news is, on April 5, this frustrating system will change at least for some buyers and sellers. That's when the federal government will begin to provide financial incentives to lenders to do more short sales. The rules also help standardize the process, so your chances of negotiating a distressed-property bargain will increase.
Under the old practices, when a financially-distressed seller brought a potential buyer who was offering less than the amount owed on the loan, the bank would order an appraisal or broker's price opinion (BPO) and then decide whether the offer was acceptable. Under the new federal rules, banks will order a BPO before the property is listed for sale, and will share information on the minimum net proceeds they're willing to accept with the sellers. If they then bring in a buyer whose offer is equal to or greater than this pre-approved amount, the lender must accept it within 10 days.
Not all sellers are eligible for this program, called Home Affordable Foreclosure Alternatives (HAFA) (for the requirements see Help for America's Homeowner's Supplemental Directive 09-09). But since the process is likely to go so much smoother for those who buy and sell under HAFA, I suggest you wait a bit until the program goes into effect and concentrate on finding these "pre-approved" deals. Of course, when you do find a property you like, you may not be the only person bidding on it. To improve your chances of winning, make sure your offer is "clean," with as few contingencies as possible (though I would never forego a home inspection). Include tax and credit records, and a mortgage pre-approval letter. If you can afford to pay cash, that will put you in an even stronger bargaining position.
Still, in your eagerness to win the property, don't forget that distressed properties often come with added financial burdens. Although under HAFA, the seller is supposed to provide clear title, to protect yourself, your contract must make it clear that you will not be responsible for any of the seller's unpaid property taxes, liens or second trusts. Also, cash-strapped homeowners often stop paying taxes and homeowners' association fees during the time between when the house is listed and the deal is closed. To make sure that you're not on the hook for these expenses, Leonard P. Baron, professor of finance at San Diego State University, recommends that you ask that the bank escrow at least six months worth of taxes and HOA fees, to cover any potential shortfall.
By June Fletcher,/ The Wall Street Journal, March 19, 2010
Posted by Paul Jones Realtor at 9:46 AM No comments: